Captain Gilabo, a greedy, Scrooge-like pirate, and his bumbling crew are spending their Christmas on a tropical island searching for the "treasure of all treasures." There is only one problem: the island is inhabited by children and the captain hates children! After holding one of the children captive, his crew begins to have a change of heart concerning their lives as fugitives. When the children share the Christmas story with their new pirate companions, the crew decides to leave the evil captain for good. Throw in a sinking island, a mis-fired cannon and a...


It is late December and Mr. Barker has sold all of the trees on his lot except for one - a little Christmas tree. It is a snowy evening, and the lonely little tree listens to Christmas carols that are playing in the distance. All of a sudden, an angel appears. He is a rather gruff, street-wise angel-- an angel that used to grace the tops of Christmas trees at Henthorne's Department Store. But this angel has been thrown out because its wing is broken. To cheer the angel up, the little tree tells the angel about this book she’s been reading: the Bible. She shar...

The Christmas Pageant That Got Away With It


With the holiday season approaching, Pastor Jack Taylor finds himself overcommitted, unable to take his own advice about not doing so much this year. When parishioner Beulah takes the pastor’s sermon of slowing down to heart and quits the children’s Christmas pageant, Pastor Taylor jumps on the opportunity to let Pam, an inexperienced teen who loves TV crime shows, be in charge. The Pastor doesn’t have the time to supervise her, so she and the kids create a new Christmas pageant called “Bethlehem CSI.” Now the long-loved Nativity scene is a crime scene! Pam t...

10 agents and a group of younger children, no gender requirements


The children are given a "Mission Impossible"-type assignment to take a trip across America to find things that remind them of the original Christmas story. The young “agents” travel to Texas, Iowa, Alaska, Maine, Hawaii, and Florida to find things in each state that remind them of the nativity. In between stops to the various states, younger children may sing or recite poems. The play concludes with a reminder that Jesus is the Prince of Peace and a prayer that we won’t be at war for any Christmases in the future. Optional corresponding scripture readings th...


Here’s a wonderful comedy that’s sure to charm audiences of all ages. When pre-teen brats Jimmy Pate and his cousin Brianne don’t get the gifts they think they deserve, they pray to God and ask for no more Christmas. The next year as the holiday fails to materialize, the two kids are the only ones who notice, in hilarious and heart-wrenching ways, that it’s missing. The store owner doesn’t have a clue about Christmas displays, the cable company operator never heard of Christmas movies, and even Jimmy’s older sister thinks the only holiday in December is New Y...


This collection will delight all church children's leaders. The 22 recitations and choral readings are perfect for preschoolers and elementary school children. Older youngsters will enjoy performing the three plays: "Christmas Gifts From Jesus," "Channel J-O-Y," and "The Fourth King." Because of the flexibility of this book, any number of children can be involved. It's great for any size church - a must for this Christmas.


Here is a lighthearted play about a group of toys in a Christmas window display. One night after hours they come across some rather unusual visitors. As Raggedy Ann and Andy, Barbie, Cat in the Hat, Darth Vader, Luke Skywalker, Winnie the Pooh and Queen Amadala watch the visitors in quiet wonder. When GI Joe spies shepherds and wise men approaching he shouts, "They are bringing in more troops!" Along with the toys, a little girl, with the help of the wise old shop owner, Mr. Wiggins, discovers that Christmas is about giving, not just receiving. A captivating ...

Night That Started It All


Imagine the Christmas story written, directed and performed by teenagers! Follow the antics of CJ, the author of this wild and crazy nativity scene, along with Amos and Jordy, two idiotic stagehands, as they try to retell the story of the nativity from a "teenager's point of view." After watching a rehearsal and weathering an emotional explosion from a stuffy lady of the congregation, the Pastor reminds CJ and the rest of the teens that, although it is okay to have fun in the Christmas program, there is still a holiness about the entire event that should neve...


Jill, a 17-year-old runaway with a new baby, has been living on the streets for the past two years. It's just a few days until Christmas, and she finds herself at a bus station contemplating whether to continue living on the streets or to reunite with her parents. Jill wants to do what is best for her 7-week-old baby, but her stormy relationship with her father makes her hesitant to return home. At the bus station, Jill meets Walter, a kindly bus station attendant, and another young runaway, Lisa. With Walter's love and guidance, Jill eventually finds her way...

A Shower for Baby Jesus


The season of giving often misplaces the reason for giving, but that's not so in this delightful play. As the children of Bethlehem plan a baby shower for Jesus before he has to leave for Egypt, they learn the story of His birth. Yes, the angels are just a bit impatient and some people don't like one of the wise men's gifts, but everyone is in the party spirit. The play also serves as a mission project as the gifts (diapers, food, clothes, etc.) the children bring on stage can be dedicated to babies born today in less fortunate circumstances. Children from 3 ...


Mary had her simple life with Joseph all planned out, that is, until she had a visit from the angel Gabriel. He told her of the great honor that God was bestowing on her; she would be blessed above all women. Come along on Mary's journey to see what it might have been like for her. Sense her excitement as she visits Elizabeth and learns more about Jehovah and His awesome power, and experience her broken heart over Joseph's unbelief. After Joseph has a visit from an angel in a dream, he decides to take Mary as his wife straightway. When he and Mary confront he...


A troop of young angels are singing their rousing "Angel Flight Song" as the play opens. Some of the angels have questioned the wisdom of making their announcement of Christ's birth to some lowly shepherds rather than to somebody "important." Through the miracle of "Angel Vision," they are able to observe firsthand how four potentates (King Herod, the Roman Governor, the high priest, and a wealthy businessman) would react if their announcement were made to each of them. They gratefully announce Jesus' birth to the shepherds as originally planned by God and ta...


This is a part of the nativity story that isn't in the Bible, but could have happened. With Mary and Joseph, the shepherds in the field, the women at the well, the three kings, and the little drummer boy, we prepare to embark on that special journey to the manger...sharing their worries, their joys, and their faith along the way. The play ends with that glorious moment when humankind first lays eyes on their Savior, followed by a celebration of music. Ideal for younger actors, this play appeals to audiences of all ages. Performance time: 30 minutes. 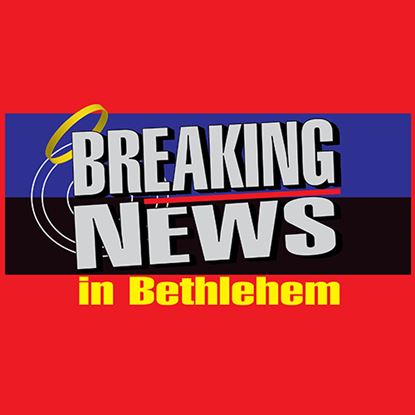 
The all angel news team of ANN, the Angelic News Network, are reporting the evening news. Tonight’s top story is the census. Gabrielle is working to keep everyone on schedule, Seraphima is maybe a little too relaxed for being on the air, Sandy Storms doesn’t have much to report on the weather, and Angel-on-the- Scene is interviewing an innkeeper about the increased business. Then Joseph and Mary arrive, and a bigger story begins to unfold before everyone’s eyes. It is not the story the angels expected to report, nor did it occur where they expected to report ...


Leah, a teenager, has never spoken a word in her life, and her mother, an old servant woman at an inn, feels guilty and worried about the future. But that all changes when Baby Jesus is born at the inn's stable. As shepherds come to worship Him, another miracle occurs and Leah speaks for the first time, to sing a lullaby. A beautiful, dramatic story. Performance time: 30 minutes.