Children's Plays for All Year


A screenplay adaptation of this play is an Official Selection of the 2022 San Diego International Kids' Film Festival.

Periwinkle, a curious caterpillar, feels compelled to find out what happens when caterpillars climb up the Great Tree –and never return! He decides to follow grumpy Thistle, who seems to be next to do the climb, but Periwinkle encounters some big obstacles he must overcome, including evading the clutches of a black widow ...

The Missionary of Oz


This stage adaptation of Frank Baum’s original story is perfect for churches and Christian schools. Dorothy, a teenager in Kansas, just isn’t interested in church anymore. In fact, she’s trying to determine what she really believes. Then in a dream, she finds she has been sent by God to a strange land, Oz, to be a missionary. Convinced she cannot accomplish the task, she is encouraged by Glinda the Good to seek the assistance of the Great Missionary in the Emerald City. On the way, she encounters three familiar characters who are also failed missionaries beca...


Confusion and fun are the business of the day at Kamp KAOS, a summer camp that boasts its own 12-watt radio station. It's opening day at the camp and director Wally Schneider is already in trouble: the mortgage is due; the world's wealthiest woman wants to buy the land the camp sits on; the county health inspector is coming; and the mysterious weather phenomenon El Gordo has brought a migration of mice! It's up to the wacky gang of counselors and campers to save the day when Wally eats cheese laced with sedative. This hour-long, one-set comedy can easily expa...


When Angel was a child, she knew she had wings. She knew she could fly. After telling everyone and enduring mockery, she left her wings on the ground in exchange for fitting in. Now she is in high school, and when she sees her friend Hunter being teased for sharing honest feelings, Angel is torn. Standing up for Hunter now means no longer fitting in, giving up her new possible boyfriend Isaac and alienating the few friends she has. But Angel gains one of the most important insights of all — that she is already loved just for being herself. An Angel Chorus use...


This is a somewhat zany retelling of the traditional story of Jonah. Although enhanced with some extra characters and scenes, the theme and overall message hold true to the Old Testament Scriptures. Included in the story is Herald, the angel who acts as God’s voice and has the ability to turn up at unusual places and in unusual ways. In the opening scene a handful of fun-loving woodland creatures discover Jonah asleep, and bring in the right blend of seriousness when they realize he must be the prophet. Along the way Jonah interacts with some sailors who even...

A Collection of Skits


At last, nursery rhymes with a reason. Here are 15 skits, based on popular nursery rhymes and tales, with delightful new twists toward biblical lessons. For instance, "The Three Little Kittens" may have lost their mittens, but they end up dressed in the whole armor of God. In "The Grasshopper and the Ants," the grasshopper learns how important it is to make provisions for the future which explains why the ants collect the bread of life. In another, the Little Christian, like the little engine that could, finds he is rewarded for facing his challenges. These s...

Word: Something To Chew On


When is doing homework fun? Bookworms, Herman and Digger, take the bite out of a book report assignment for frustrated and bored Christopher. The Word of God comes to life as Biblical figures enter Christopher's bedroom through a life-sized "Holy Bible." These historians tell their story with humor intermixed with the witty bickering of the lovable bookworms. You'll enjoy a new look at your favorite Bible heroes and heroines, such as the bravery of Joseph as he is sold into slavery by his spiteful brothers or the adventure of Moses and the hapless Israelites at the parting of the Red Sea.

New Kid In The Flock


A comedy about the hardships teenager, Matt Duncan, goes through when his family moves from California to a small mid-western town. Matt is forced to make new friends and important choices that could affect the rest of his life. The Duncans' new neighbors lead them to Christ and invite them to their church. Unfortunately, the church youth are not very receptive to Matt and even think he is packing a gun in his over-sized pants! Fortunately, the church leaders are able to help, and as Matt accepts Christ, the church kids also start anew. Lots of laughs in this play which effectively captu...

Prince Eugene and the Cinder Queen


Here’s the Cinderella story retold, with a little help from above! Overworked and derided by her stepmother and three stepsisters, kindhearted Cinderella can only dream of attending a ball at the castle. Suddenly her Angel Godmother appears, but she almost blows the whole fairy tale before the Godfather rushes to the rescue on his Zucchini 500. (There’s a shortage of pumpkins!) Prince Eugene dreams of finding an honest girl, but his eccentric fans make a nightmare of his party. His only hope is the sweet young woman who isn’t afraid to state her own thoughts....


Here is a perfect play to introduce children to the Underground Railroad. Designed as a Reader’s Theatre, "The Silent War" is a story of three slaves – and eight little mice – who escape to freedom along the Underground Railroad. Uncle Amos, Belle, and Buck Henry, all slaves on a Kentucky plantation, didn’t plan to escape until they met Zakary, a Bible salesman and abolitionist. He shows them the way to cross the river into Ohio and from there travel north to other stations. Along the way, the three slaves are helped by other dedicated abolitionists including... 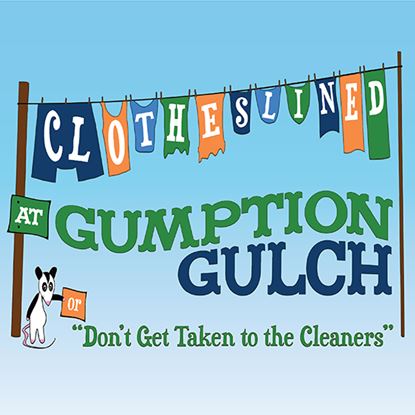 
Hard times have come on Gumption Gulch and Grandma Gertie Parker is forced to open a clothes-washing service to earn extra money. Even Sheriff Gideon Gumption is “moonlighting” (though the term has him totally baffled) at the stagecoach office and a local lunch spot. Grandma Gertie’s old nemesis has sent her two boys, Luther and Ulysses Bragg, to town to put Gertie’s laundry service out of business as payback for an old feud. Add in a possum-farming brother and sister couple (Elrod has a serious case of “the anxieties”), a blacksmith who dreams of being a com...


Here are six clown skits which cover subjects ranging from Christmas and the Fruit of the Spirit to how to talk to God. Even creation is not safe from the clowns' crazy interpretation of the six days (and what God did on the seventh!) in "A Very, Very, Very, Very, Very Long Time Ago." Created with ease of presentation in mind with minimal cast and prop requirements. #3019M - CLOWNING AROUND


Here are four holiday puppet plays, two for Christmas and two for Easter, that are sure to delight young audiences. "Barnyard Christmas" has more cow jokes than you've ever "herd," but these cows bring a "mooving" message of selfless giving. "Who Will Go" takes laughter to new heights as these loveable angels try to help fix the problems of the world. Easter skits include "The Bad News Bullies" and "Hannah."


In the Prologue, Light, Night, Sky, Sea and Earth tell how and why God created them, and why He went on to create Adam to rule over all the other creatures on the Earth. In the Garden of Eden, Adam decides to name all the animals he meets. A pair of Elephants teach him some manners, describe how versatile their long noses are compared with his, and leave him to ponder his limitations. A pair of Monkeys play word games with him to arrive at their name, which Adam finally decides must be "Montgomery." Satan as the Snake appears and privately reveals to the audience his rebellious origin a...


How students cope with the death of classmates due to drinking and driving is poignantly brought home in this one-act. On one side, Lisa is consumed with guilt because she didn't take away her brother's car keys, even though she knew he drank. On the other, Kurt is racked with pain because if he hadn't been drinking, he wouldn't have needed his sister to pick him up and she wouldn't have been in Lisa's brother's car. Then the football team wants to erect a roadside cross in memory of Lisa's brother right next to a cross the girls are planning in memory of Kur...