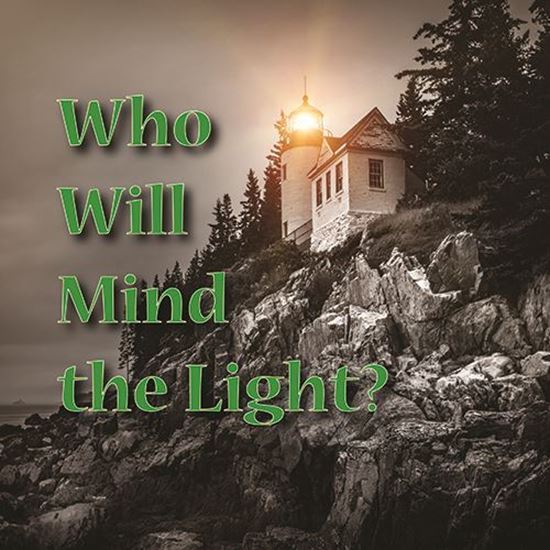 Who Will Mind the Light?

The winter of 1860 is a brutal one in Prophyte Harbor, a small village on the coast of Maine. Those who haven’t already left are dangerously low on food and fuel, including oil for the lighthouse lamps which could ensure the safe arrival of a critical supply ship. Meanwhile, the few survivors from a small nearby island that has been devastated by influenza, are seeking refuge on the mainland. During a fearsome night storm at sea, they land, led there by a light from a figure swinging a small lantern. Like the Christmas story of the shepherds and Wise Men being led by a bright star in the middle of darkness, the light of God has beckoned to these modern-day refugees. What they don’t expect to find, however, is that Prophyte Harbor seems to be a ghost town. The surrounding emptiness fills their hearts with dread. They carry their plentiful supplies to the church to rest. Thankfully, the next morning becomes one of celebration for everyone. God sent His messenger to help all of His children, to guide and sustain them throughout their travails so they would find each other, and ultimately find their way. It is in the telling of the first Christmas by the Messenger that the town is renewed, and hope is restored; a town is reborn. “Who Will Mind the Light?” All of God’s people. Original songs include “Show Us the Way,” “Out of the Waves,” “By the Grace of God,” and “What Makes This Home,” plus two suggested carols. About an hour.

Playwright Terri Dill talks about her musical "Who Will Mind the Light?"

What inspired you to write this musical?

This musical is the third one in my “Light” series.  The title alone tells all.  I wrote it to those people going through hard times; there is always hope.  Jesus is the “Light” and we as His people must spread the “Light” to the world, so the Good News of Jesus Christ may be told.

What's your favorite part or line in the musical?  Why?

My favorite part in the play is when Gabriel speaks about the very first Christmas ever. He is talking directly to God and it is almost pleading.  He wants the people of Prophyte Harbor and the people from Berea Island to never forget what happened at the first Christmas.  All who were there did “mind the light.” And now 2,000 years later that “Light” still shines.

Where did the characters come from?  Are they based on people you know?

Some of the characters carried over from the other two musicals, “In Light of Everything” and “In the Light of the Nativity.”  Yet I did add new people with new stories to be told.  I gave every character a part to play that completes the storyline.  Even from the children they express, grief, hopelessness yet they tell of their hope in Christ and they share that. The audience may see themselves in one of the characters and be able to relate their own stories or feelings to what is happening on stage. They too, may find hope in Christmas. The characters are people I basically makeup, yet I love them and the part they play in the musical.  I don’t base their personalities on real people, but I give them names of people I know or have known.  My hope is to bring to life my play through my actors.

What did you try to achieve with this musical?

I want to achieve what I feel God has placed on my heart to write about.  Sometimes I just sit down and start typing.  I layout four Bibles and I try to achieve the message of the Scriptures. I become His mouthpiece and the wonderful people who make up the Drama Ministry are so dedicated to get the message out there.

Do you have anything else you'd like to add?

I feel if we have touched even one life through the telling of our story then indeed God has been glorified.  I want those who look at this play and are wondering if they can do this in their Church or event center.  The answer is YES!  Our Drama Ministry has its own story to tell that would be a play in itself, and they all would tell you that when you do anything for the glory of God. He makes it happen.